News / Audio For Film 101: How To Record Audio For Video In A Car

Audio For Film 101: How To Record Audio For Video in a Car

Cars are valuable tools for filmmakers. Sure, they are important for getting from A to B, but they are also a killer place to record audio.

There are two reasons you may find yourself recording sound in a car. The first is if you need to record a voiceover or ADR but don’t have access to a studio space or don’t have somewhere at home that is acoustically treated – cars are excellent DIY sound booths. The second is if your shoot requires it: if you’re a vlogger and want to record yourself on-camera while driving (carpool karaoke anyone?); if you’re shooting a film and the scene takes place in a car; or if you’re recording Foley and need to capture the sound of a shifter crunching into gear or keys being jammed into the ignition. Whatever the reason, cars are excellent environments for recording – if you approach it correctly. Here are a few tips for recording audio in a car. 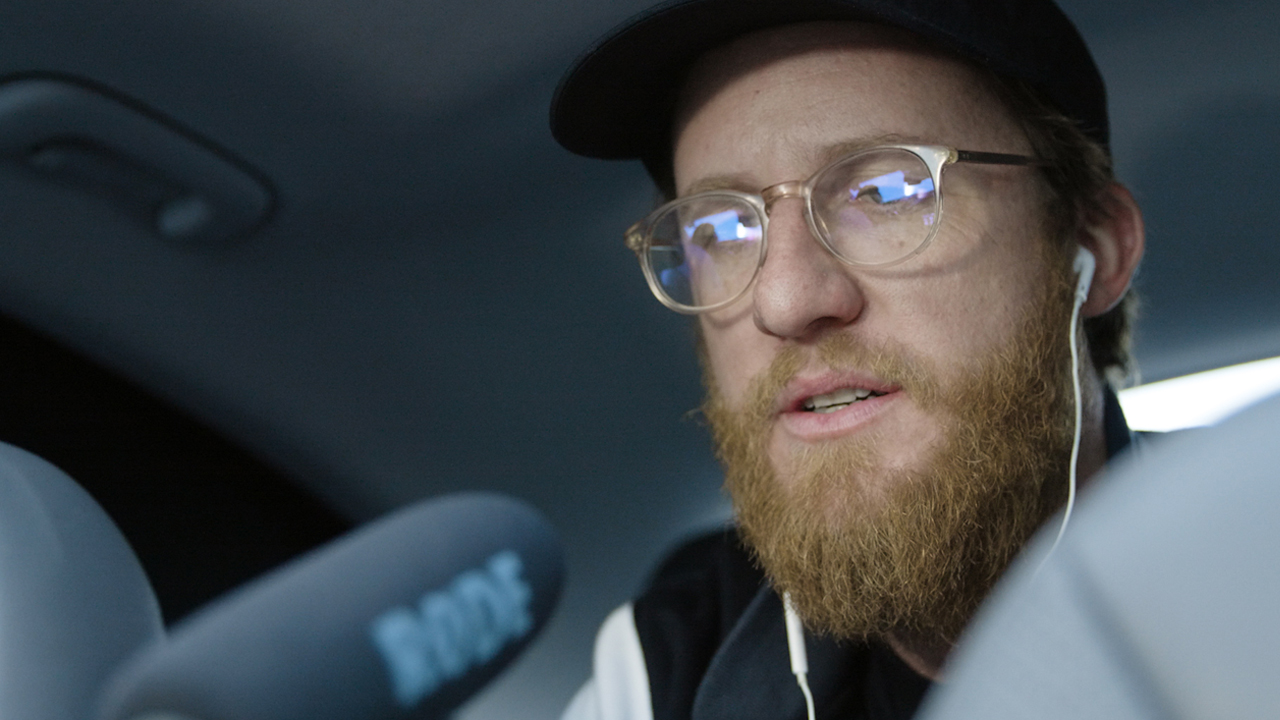 First of all, you’re going to need a good mic to record with. If you’re a filmmaker, it’s likely you’ve got a couple of video mics in your arsenal. RØDE VideoMics are excellent for recording all kinds of audio for video, voiceover and Foley. They all feature a tight pickup pattern, giving them great directionality. This will ensure your recording focuses on sound in front of the mic while rejecting sound from the sides, which will help reduce unwanted noise like the sound of the car, traffic, or reflections within the car. They also feature high-quality Rycote shock mounting, which isolates the microphone from bumps and vibrations – this is particularly important if you are recording while driving.

When recording in a controlled acoustic environment like a car, any VideoMic will perform brilliantly. Depending on what you’re shooting, some of the features in the Pro mics will be handy to you, for example, the high-pass filter on the VideoMic Pro+ for taming the low-end rumble of traffic noise. Or you may prefer something compact and unobtrusive, like the VideoMicro.

The carpeted floors, plush seats and airtight seals on the doors and windows in a car make for an excellent acoustic environment for recording audio – probably the best most DIY filmmakers will have access to. That being said, there are still lots of reflective surfaces that can create a sense of ambience in your recordings – windows and your dashboard – and if you’re recording a voiceover or overdubbing dialogue and want a completely ‘dead’ sound, you may want to look at soundproofing your car even further.

This is easily done: throw a blanket over your dashboard and grab some towels to hang from your windows. If possible, keep to the centre of the car when recording to ensure you are as far from any reflective surfaces as possible. This also gives you somewhere to rest your laptop or recording setup ­– the centre console! 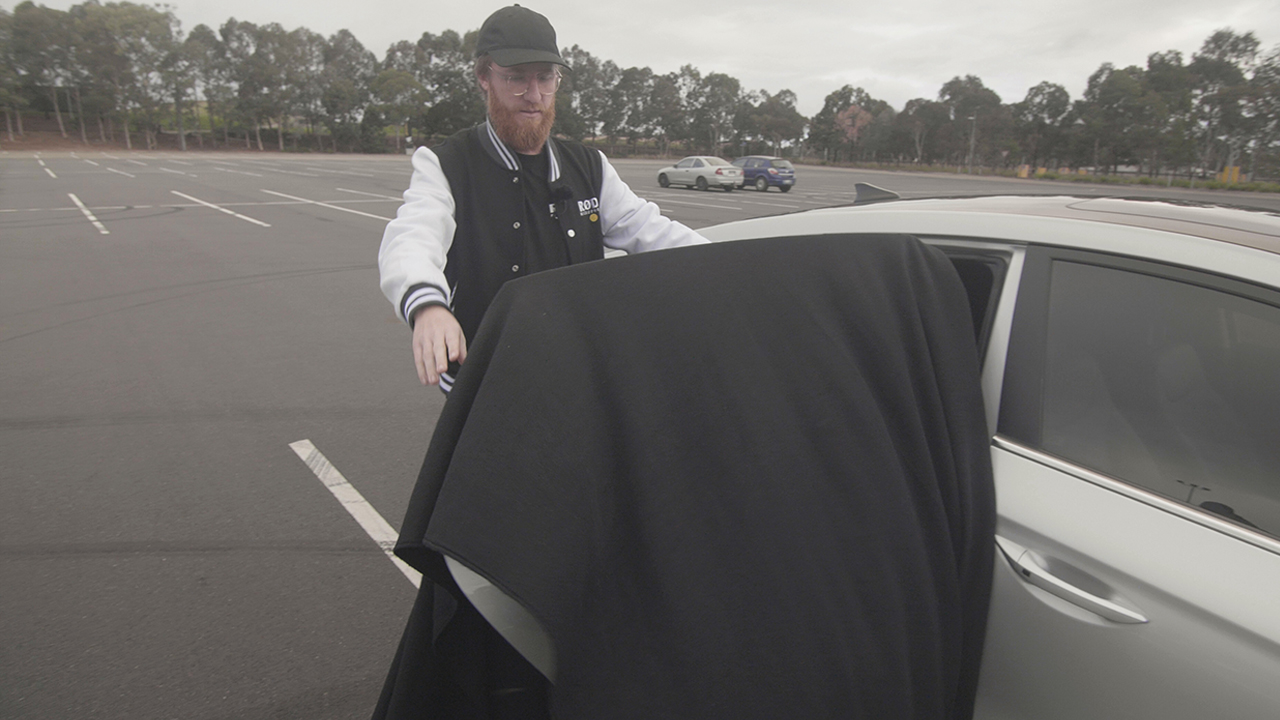 Where you position your mic in your car will obviously depend on what you are recording. Here are a couple of different scenarios you might find yourself in:

If your car has a sunroof or is a convertible and you need to record dialogue while the car is parked, stick your VideoMic on a boompole and position it over the heads of your actors. To do this you will need a pivot adaptor to connect your VideoMic to a boompole, as well as an extension cable to connect your mic to your camera, such as the SC8 or VC1. You could also use a wireless mic like the Wireless GO for more flexibility. Simply clip the transmitter to the boompole close to the mic, plug the mic into the transmitter and link the transmitter to the receiver on your camera­ – compact wireless boompole recording!

If you are recording a voiceover or ADR in your car, place some towels and blankets over the dash and windows to deaden the space. Parking in a garage will help reduce background noise even more. If you don’t have access to a garage, just park somewhere with minimal traffic and away from flight paths, construction sites, or anything else that could ruin your recording. You’ll need a Joby mount or something similar that you can mount your mic onto. Simply slot your mic into your mount’s cold shoe connector, angle the front of the mic towards your face, and hit record. Again, we find sitting in the middle of the back seat works best in this scenario. Or sit in the front seat and clamp your mic onto the steering wheel. 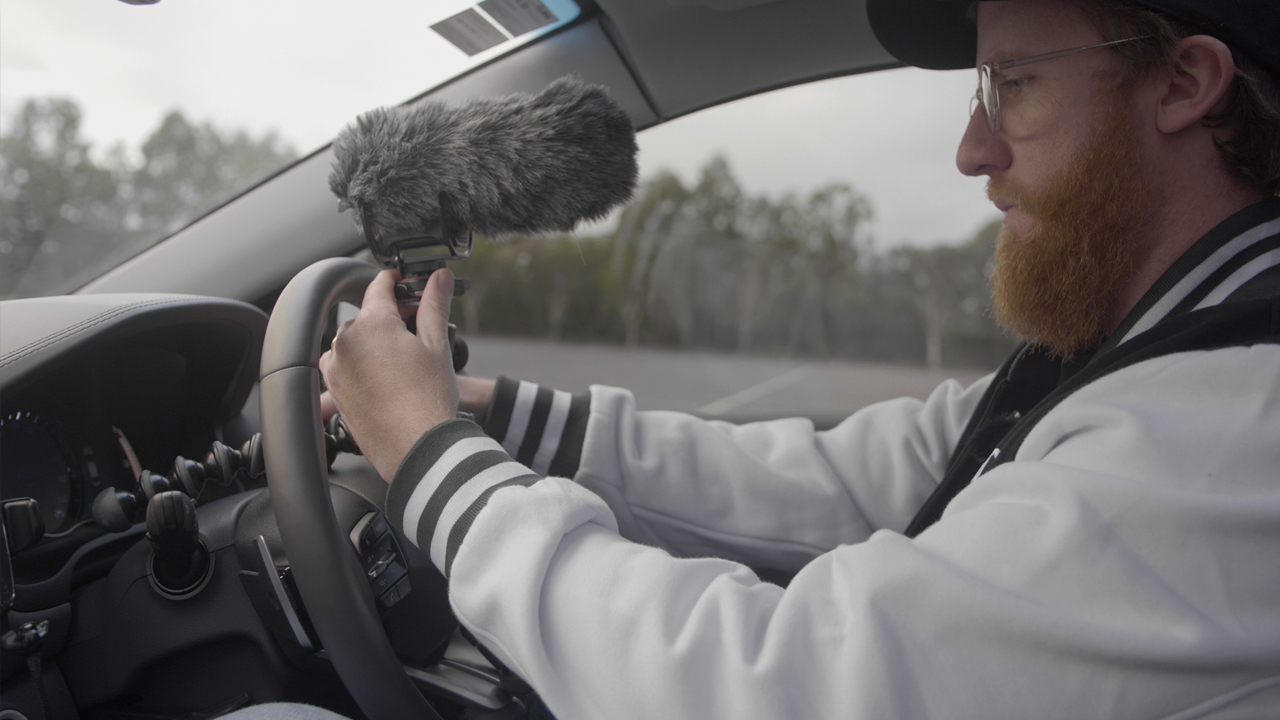 If you need to shoot a vlog or scene in a car that requires video and audio to be recorded simultaneously, slot your mic onto your camera – something compact and with a wide angle lens will work best – stick your camera on a Joby mount and place the rig onto your dashboard. Use gaffer’s tape or BluTack to secure your mount to the dash so it doesn’t come crashing into your lap, and try to get your camera as close your mouth as possible. That being said, it’s important that your rig doesn’t obscure your view of the road (safety first!). A compact mic like the VideoMicro or VideoMic GO is a great option for this scenario. Or if you’re shooting on an iPhone, the VideoMic Me-L would be perfect.

If you’re shooting a vlog or scene with a full car, the above technique will likely result in unbalanced dialogue as the people in the front will be much closer to the mic than the people in the back. In this case, try placing your VideoMic in the centre console (on the handbrake or armrest) and positioning it at a sharp angle so that the mic is as evenly between the driver and passengers as possible. This works best when there is just one person sitting in the centre of the back seat.

If you’re recording Foley in a car, for example, the sound of an indicator clicking or an engine revving, the key is to get as close to the sound source as possible. If the sound is particularly subtle (like a gearstick crunching into place) try a few different positions and actions so you have multiple options to work with in post. Remember, what sounds great to your ears might sound underwhelming in your DAW or editing suite, so don’t be afraid to go over the top. Also consider your environment. If you are only recording inside the car, more soundproofing will result in cleaner audio, so grab those towels and blankets again. Making sure you are recording somewhere quiet is important too. The VideoMic Pro and VideoMic Pro+ are great for recording Foley. Their gain control is particularly handy if you’re recording both very quiet and very loud sounds, and their high-pass filter is great for reducing traffic noise or any other unwanted background sound. The VideoMic Pro+ also features a high-frequency boost to further enhance detail and clarity. That being said, if you own any mic from the VideoMic range, it will perform very well in most scenarios.

These are just a few of the ways you might use a VideoMic to record audio for video in a car. Don’t be afraid to try different techniques and hacks to make your mic work for your needs. Find out more about our VideoMic range here.