RØDECaster Pro II / Setting Up The Mixer And Assigning Channels

Setting Up the Mixer and Assigning Channels 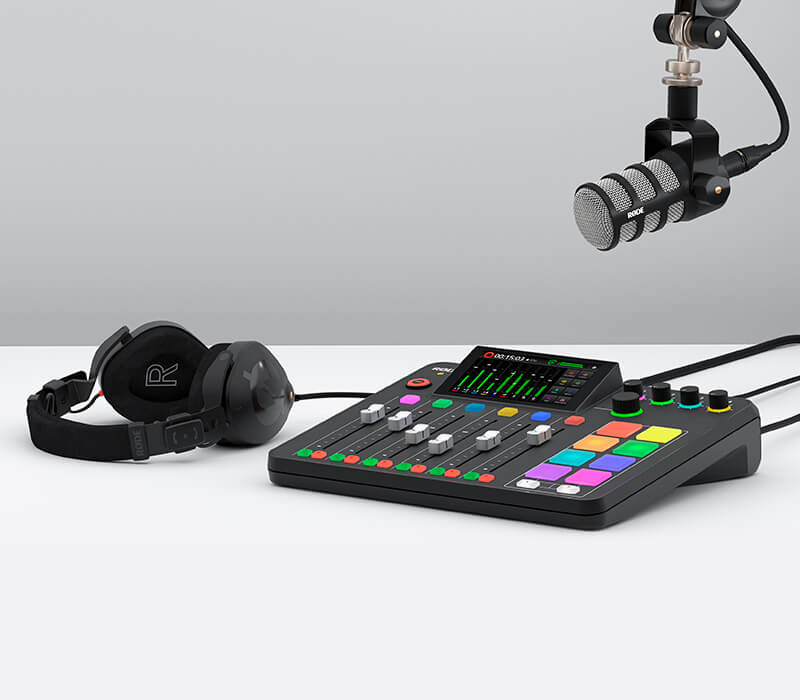 Setting Up the Mixer and Assigning Channels 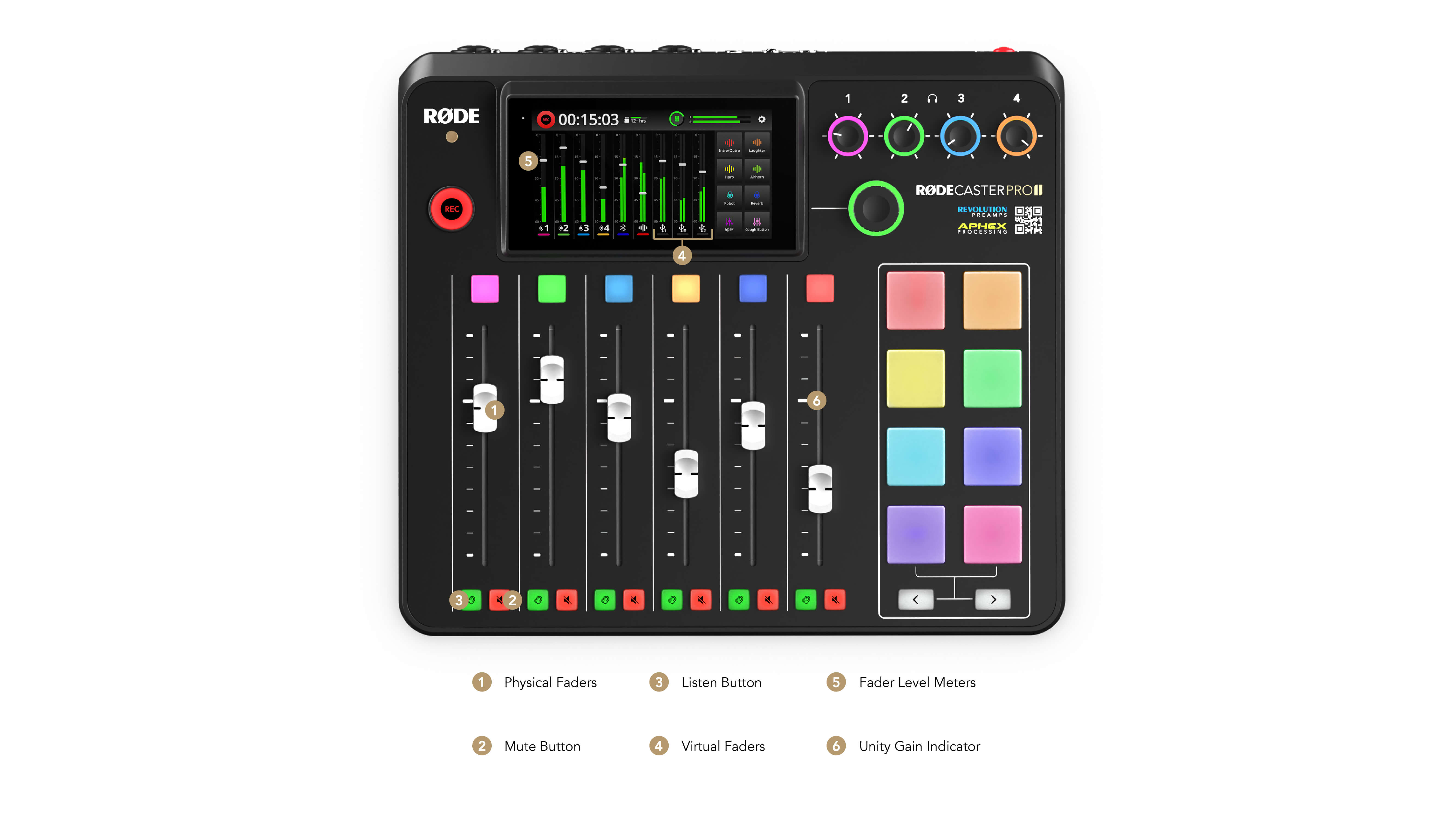 By default, these channels will be assigned to the faders as follows (unless you dictate otherwise during the Setup Wizard process): 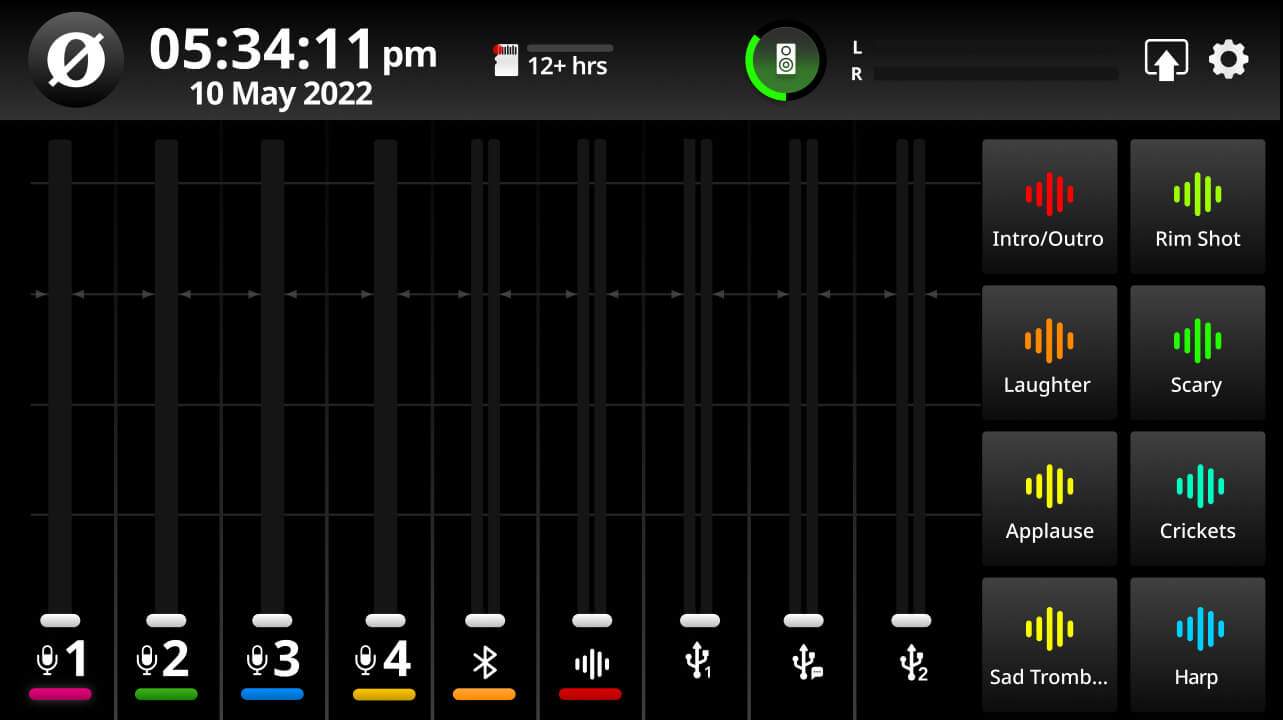 There are multiple ways to change the mixer configuration. This can either be done during the Setup Wizard process, or via the fader set-up screen or the channel set-up screen. 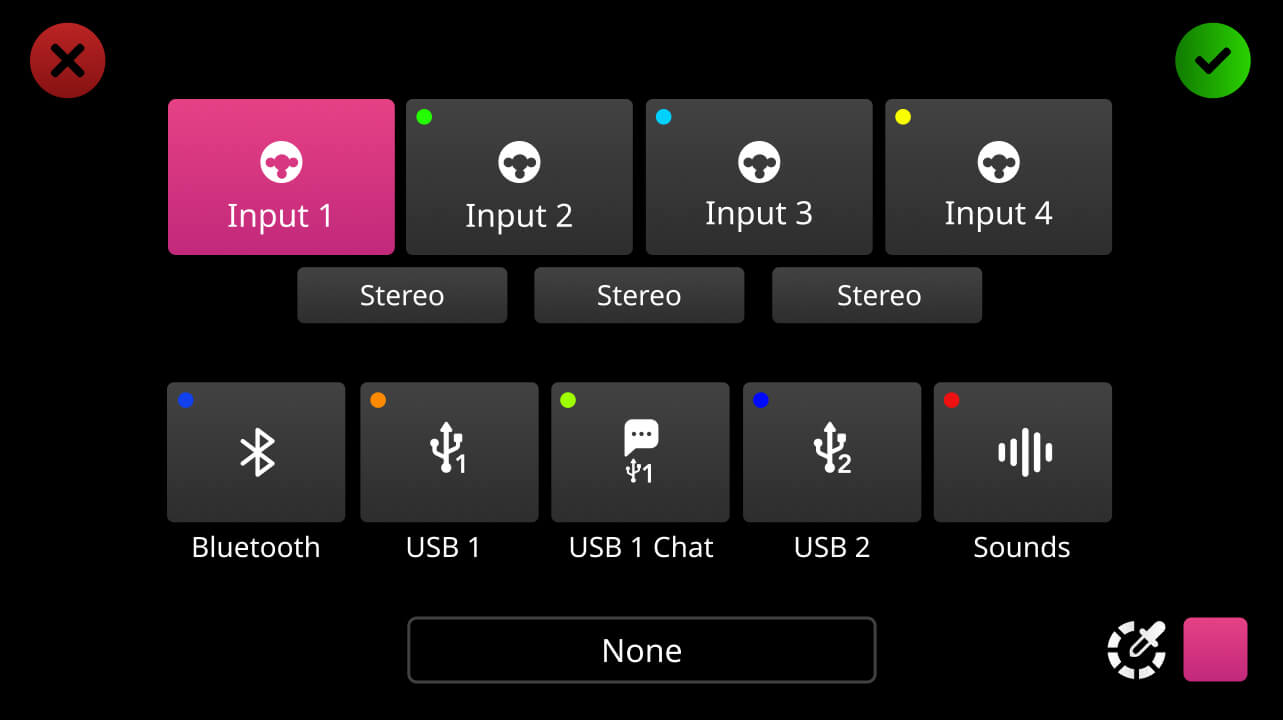 To access the fader set-up screen, tap the settings cog, then ‘Faders’ (or tap the fader icon on the bottom left corner of the channel set-up screen). Here you can assign channels to the physical and virtual faders by dragging and dropping their icons to the desired location using the touchscreen. This is a quick and easy way to change the configuration of the mixer. You can also tap a fader icon to access the channel assignment screen. 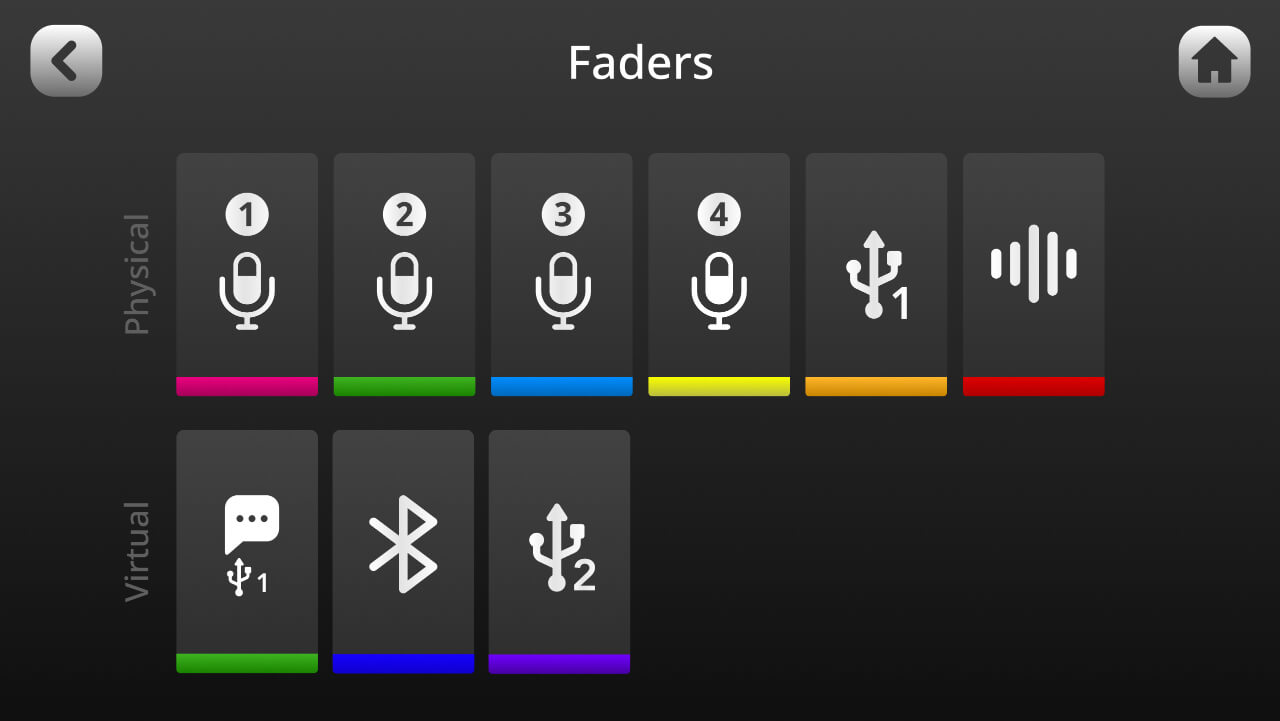 Using the Physical and Virtual Faders

The RØDECaster Pro II features six broadcast-quality physical faders and three virtual faders, allowing you to mix a total of nine separate inputs with complete hands-on control. The physical faders function like any other mixer: simply use the sliders to adjust the level for that channel. The fader position will be mirrored in real-time on the mixer interface. The virtual faders work just like the physical faders, only you have a digital fader that is controlled by tapping the level meter then using the rotary encoder.

‘Unity gain’ for each fader is indicated by the white markers on the physical mixer and the small arrows on the virtual mixer (in default level meters mode only). This is helpful for balancing the input level with the output level and is a good starting point when setting your levels. If a fader is at unity gain and the signal is still too low, boost the preamp gain level in the channel set-up screen rather than pushing the fader up further. This will help you achieve a healthy signal with minimal noise.

There are two ways to display the level meters on the virtual mixer: ‘Default’ mode and ‘Broadcast’ mode. In ‘Default’ mode, there are markers at regular intervals, allowing you to easily visualise your levels, as well as a marker for unity gain. In ‘Broadcast’ mode, the level meters will include dBFS (decibels full scale) markers as well as a gain reduction meter (if you have the compressor activated on that channel). To switch between the two modes, go to settings then ‘Display’ > ‘Metering’ and select either ‘Default’ or ‘Broadcast’. 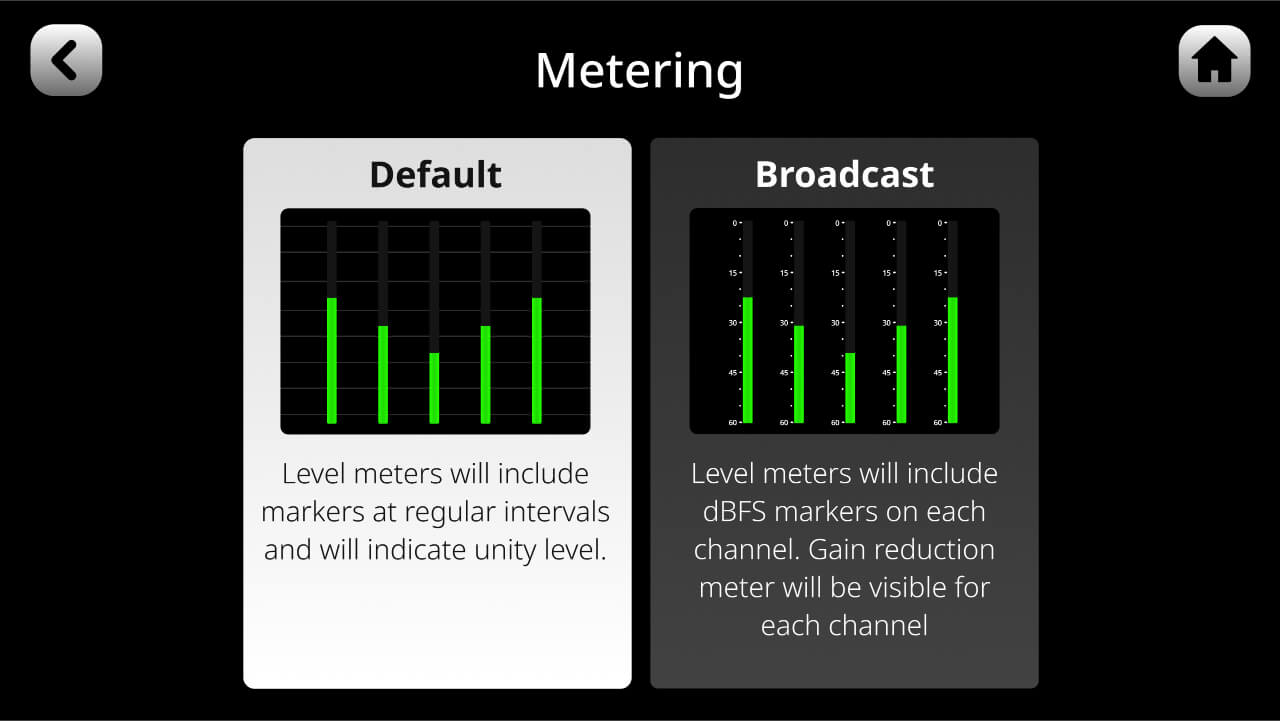 The red button under each of the RØDECaster Pro II's physical faders is a mute button. This will simply mute that channel on the output. You can also access a mute button for the three virtual channels by tapping the level meter then tapping the mute icon. When a channel is muted, the button and fader on the virtual mixer will be illuminated red. 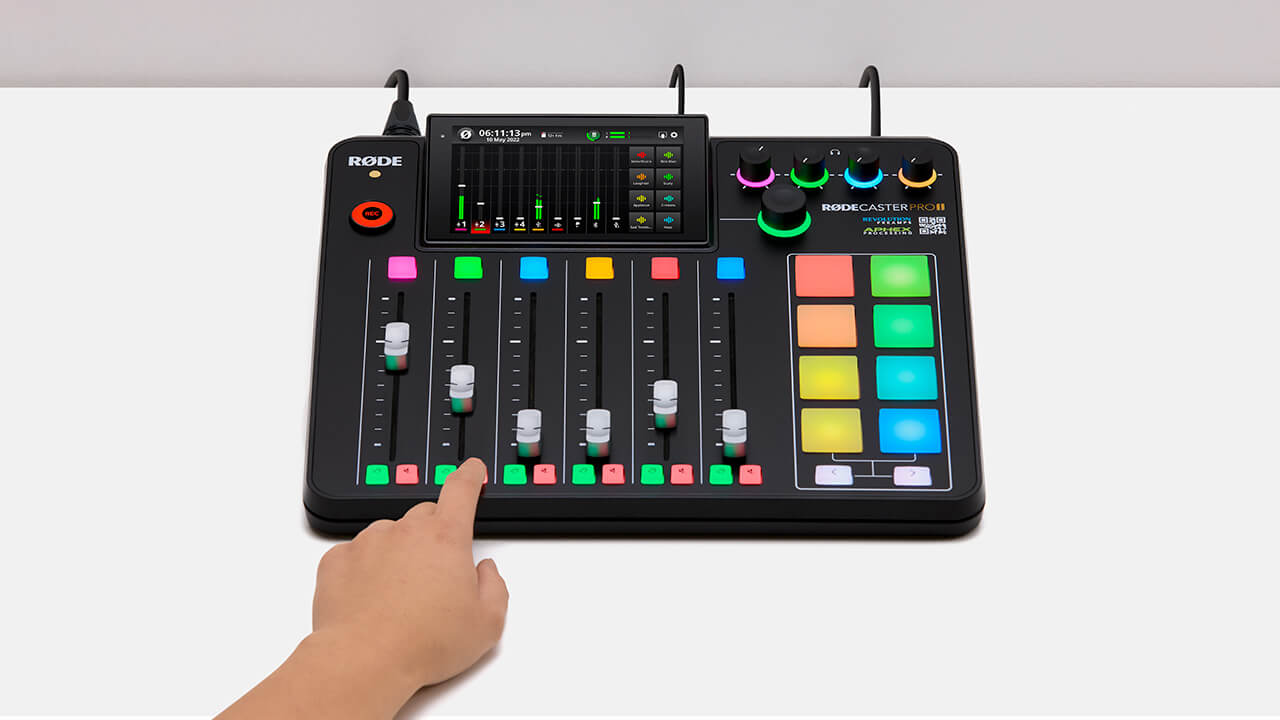 The green button under each of the RØDECaster Pro II's physical faders is a “listen” button (also known as a solo button). This allows you to monitor the audio from a channel by itself, without the rest of the audio mix (note: the solo’d audio will only be heard by the host/producer on headphone channel 1). You can also access this feature for the three virtual channels by tapping the level meter then tapping the ear icon.

Note: Pressing both the listen and mute buttons will activate ‘Back Channel’ mode, allowing the host/producer and guest to communicate “off-air”. This action can also be allocated to a SMART pad – check out the 'Using the SMART Pads' section for more information.

There are two different listen button modes: ‘After-fader Listen’ and ‘Pre-fader Listen’. To switch between these, go to settings, then ‘Outputs’ > ‘Listen’.

‘After-fader Listen’: When ‘Listen’ is engaged, the host/producer on headphone channel 1 will hear the channel at the fader level.

‘Pre-fader Listen’: When ‘Listen’ is engaged, the host/producer on headphone channel 1 will hear the channel at unity gain, regardless of the fader position. 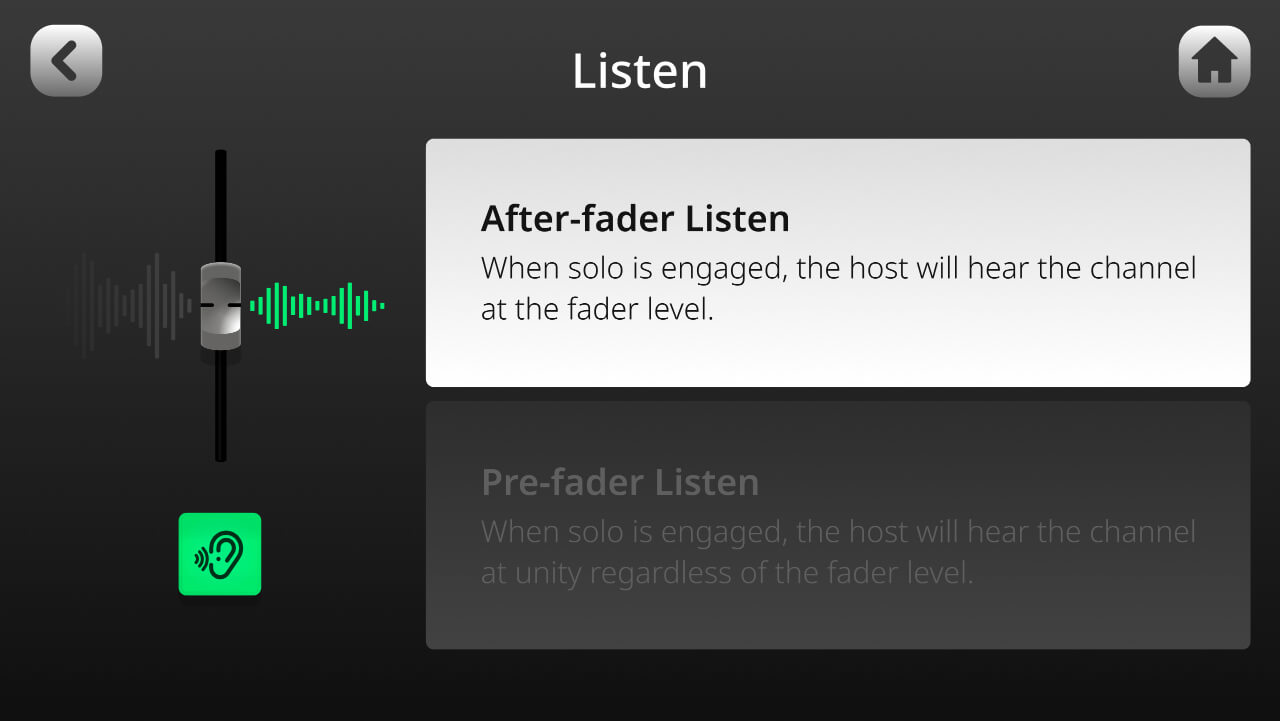 You do not need to select the green listen buttons for all of the channels you are using when recording. They are for “listening” to a particular channel without hearing the rest of the audio. Selecting the listen buttons for all of your channels may result in audio being recorded that you do not expect (for example, if you have all of your activate channels solo'd using the listen buttons, you may not notice audio coming through another channel because it will be muted in your headphones, thought it will still be recorded).